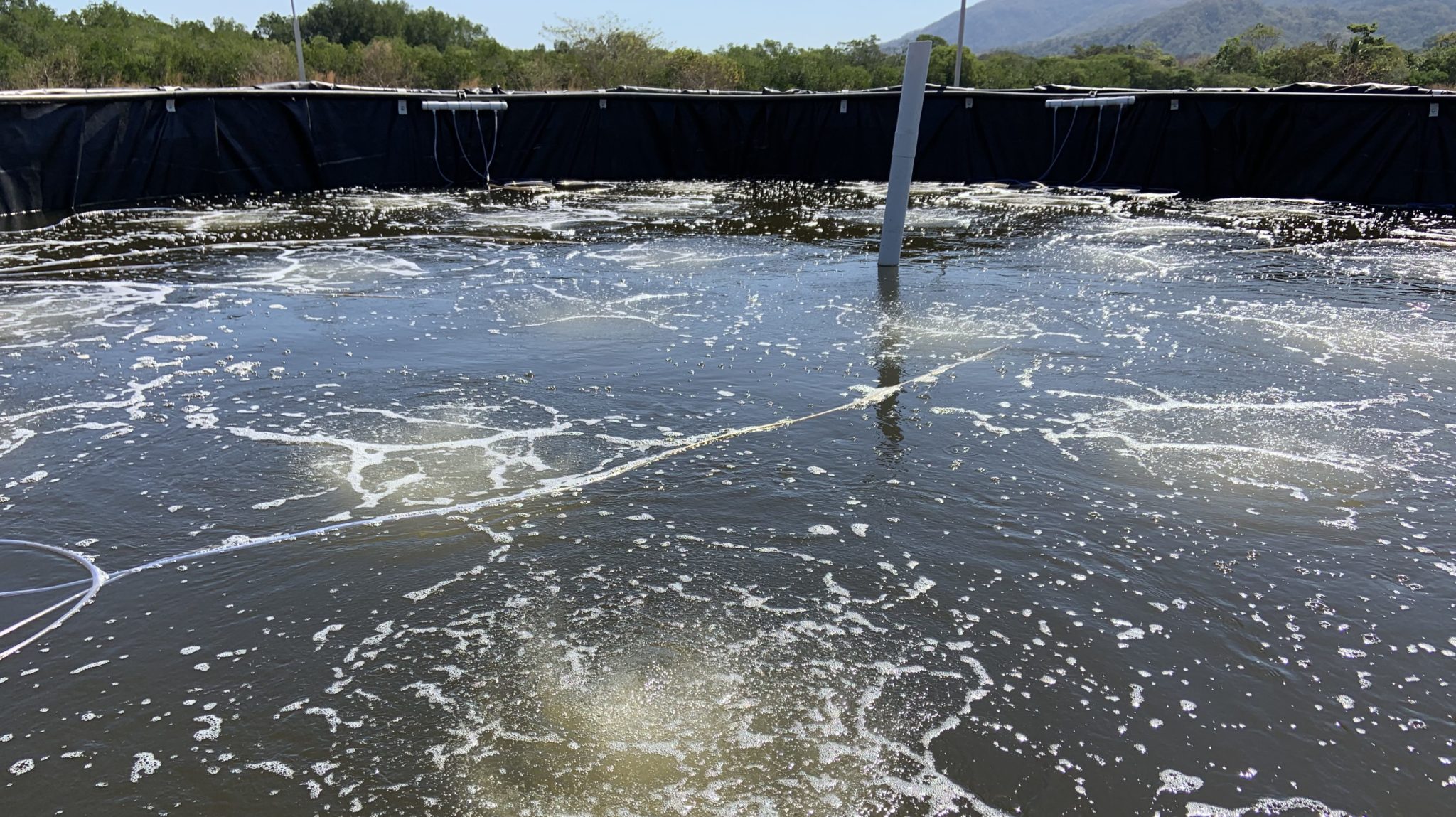 As mentioned in the introduction of this miniseries, the first management method that we will study is the Biofloc Technology System or BTS, which consists in promoting the growth of beneficial floccules in the water that will act as water remediators, pathogen control, water quality buffers, and an alternative protein source.

The cornerstone of BTS is the use of what is understood in the industry as probiotics. Although probiotics and prebiotics are one of the most significant components of bioflocs, they are not the only ones. As mentioned earlier, BTS rests on the application (or promotion) of different microorganisms to the water culture, looking to create what is known as floccules, biofloccules, flocs, or bioflocs. The exact composition of these aggregates will differ between systems, but they all have common components: nitrifying and denitrifying bacteria, yeasts, microalgae, and other zooplanktonic elements. All these living organisms are promoted and included in the water culture, and their growth is associated with the organic matter present in the tank, mainly from dead organisms, feces, and uneaten feed.

The term probiotic was introduced by Parker in 1974 in the field of medicine and is defined as “organisms and substances that contribute to intestinal balance”; although this definition was appropriate at the time, it is no longer relevant due to the numerous variations and applications that probiotics have been given in many fields of science.

According to the most cited definition in the general literature provided by Fuller in 1989, probiotics are “live bacteria applied as food supplements that are capable of colonizing the intestine and have a positive effect on the intestinal balance of the host”. This definition continues to be cited in the field of medicine and human nutrition; but it still seems to be incomplete for the aquaculture industry since the concept of probiotics has since evolved, for example, to include not only living microorganisms but also parts of them (enzymes, bactericides, and other compounds). In addition, several studies show that the benefits of probiotics use are not exclusively limited to the intestine.

It was not until 1998 that Moriarty proposed that, due to the intense interaction between aquatic organisms and the culture medium, the term probiotics applied to aquaculture should also consider them as additives to culture water. Since then, the term probiotic has been understood as the preparations of microorganisms that, alive or in parts, are added to the food or in the culture water and have a positive effect on both the quality of the water and the health of the organisms in culture.

Of the various organisms produced by aquaculture, shrimp is especially attractive for BTS application; this is mainly due to its ability to thrive in turbid water with a high organic material content. In addition, it is a detritivorous species, which encourages the consumption of flocs both at the bottom and in the water column, increasing feed efficiency and the probability of colonization of the intestine. Apart from being an alternative protein source (significantly reducing feeding costs), probiotics have two important benefits (1) they improve water quality by eliminating or significantly reducing the need for water exchange, and (2) they increase the survival of cultured organisms.

The improvement in water quality provided in a BTS is mainly due to the ability of certain bacterial groups to reduce ammonium (NH4) — which in high concentrations is toxic to shrimp— into nitrogen (N). This reduction occurs through two metabolic processes carried out by different bacterial groups. The first process is known as autotrophic nitrification and the second as heterotrophic denitrification.

Autotrophic nitrification is the process by which bacteria oxidize ammonium into nitrates for energy using oxygen and inorganic carbon; this process is divided into two phases. The first phase of autotrophic nitrification is the oxidation of ammonium to nitrite (NO2) catalyzed by ammonium-oxidizing bacteria, mainly belonging to the Nitrosomonas, Nitrosococcus, and Nitrosospira genera.

The second phase of autotrophic nitrification is the reduction of nitrites to nitrates (NO3) carried out by nitrite-oxidizing bacteria, mainly represented by the genera Nitrobacter, Nitrospina, Nitrococcus, and Nitrospira.

The second metabolic process involved in improving water quality is denitrification, carried out by bacteria of the Pseudomonas, Thiobacillus, and Rhizobium genera, among others. This process uses the metabolic residues of nitrification (NO3) and reduces them to free nitrogen through an anaerobic process that uses organic carbon.

It is interesting to note that these metabolic processes can be second nature for some of the bacterial genera mentioned, that is, if some environmental conditions such as temperature, dissolved oxygen, pH, or the carbon-nitrogen ratio, among others, are not within specific ranges, these bacteria are capable of using metabolic pathways other than ammonium reduction, which reduces their role in improving water quality. For this reason, control of culture parameters, mainly temperature, dissolved oxygen, and ammonium concentration, need to be closely monitored in a well-managed BTS. Furthermore, the selection of the bacteria genera used is essential. If probiotic and bioremediant bacterias are selected from a regional or local strain, the probability of success increases.

One of the main advantages of probiotics in a BTS is increased survival. Different mechanisms allow this effect. First, probiotic bacteria inhibit the growth of other bacterial strains, including pathogenic bacteria (such as Vibrio parahemoliticus), due to competition for space and nutrients; this mechanism is known as competitive exclusion.

The massive addition of bacteria of the same strain (or group of strains) to the medium, coupled with culture control to promote optimal growth of the group of selected bacteria, makes the rest of the bacteria originally present in the medium, including the possible pathogenic bacteria, unable to compete for available carbon and/or mineral sources (such as iron); in addition, due to the increased presence of added probiotic bacteria, pathogenic bacteria lack adhesion space both on the outer membrane and inside the intestine, making colonization impossible and therefore eliminating their harmful effect.

Another main mechanism that enhances survival is the production of antibiotic enzymes or other types of bactericidal compounds synthesized by probiotic bacteria. In addition, the use of probiotics has been correlated to an enhancement of the innate immune system. New studies point out bacteria and bacterial formation as one of the main components of invertebrate immune system response, which plays a determinant role in responding to diseases.

In addition to the benefits associated with improved water quality and survival, probiotics have been linked to other benefits such as improved digestion caused by the production of enzymes by the bacteria that colonize the intestine, which results in a more efficient feed conversion ratio (FCR); this also translates into the increase in the availability of food for cultured shrimp derived from the creation of flocs.

As mentioned at the beginning of this document, bioflocs are composed of more than just probiotic bacteria; they also have yeasts and zooplankton, which are a very good source of protein, and microalgae which are an excellent source of essential fatty acids. This combination of microorganisms conglomerated in floccules can significantly reduce the amount of feed given in a pond, further improving water quality and reducing costs by up to a 15% in this category.

As we are talking about sustainable management, it is important to emphasize some points regarding environmental impact.

To maintain the functions of a BTS it is important to maintain dissolved oxygen in the medium and lets remember that the oxygenic processes described during the autotrophic nitrification process require oxygen consumption, reducing its availability for shrimp. Therefore, the BTS requires higher intensity aeration than that used in clear water production systems, increasing energy consumption from this component.

When using BTS, to promote the creation of flocs and acquire all the benefits of the technology, the farmer needs to reduce water exchange to the minimum. In fact, the farmer needs to add a series of elements to the “raw” water and let it mature for a few days with high aeration to promote the growth of bioflocs without any water exchange; this allows reducing the intensity of water exchange from between 15% and 30% of the total volume of water per day to between 0% and 5%.

This characteristic of the BTS significantly reduces the water exchange energy used. According to some studies, even when accounting for the aeration energy increase derivated from the promotion of bioflocs (and increased oxygen consumption), biofloc systems reduce the overall energy consumed, therefore reducing the emission of greenhouse gases and significantly reducing the hydric footprint of production.

Apart from increasing productivity and reducing energy and water consumption, there is a very significant aspect of BTS that improves the sustainability of the farm, and that is the reduction in the use of antibiotics. Apart from the previously described improvement in survival and immune system boosting, the promotion of beneficial bacteria is incompatible with the application of antibiotics, therefore, farms using BTS do not use antibiotics in the production, which added to the significant reduction of water exchange has a substantial benefit in the surrounding water environment and a reduction of risk on human health.

Finally, the application of this technology (as well as the rest of the management methods that will be described in this series) require highly trained personnel. This means that farms need better-qualified labor, which results in highly paid jobs. These costs increase for the farm are well absorbed by the benefits of the technology both in environmental and economic terms, making BTS a truly sustainable technology.

Note: We tried to cover the most significant components and scientific bases for the BTS and its logic in this article. If you wish to implement this technology on your farm, we strongly recommend looking for expert advice since there are several details that we cannot cover in one paper.