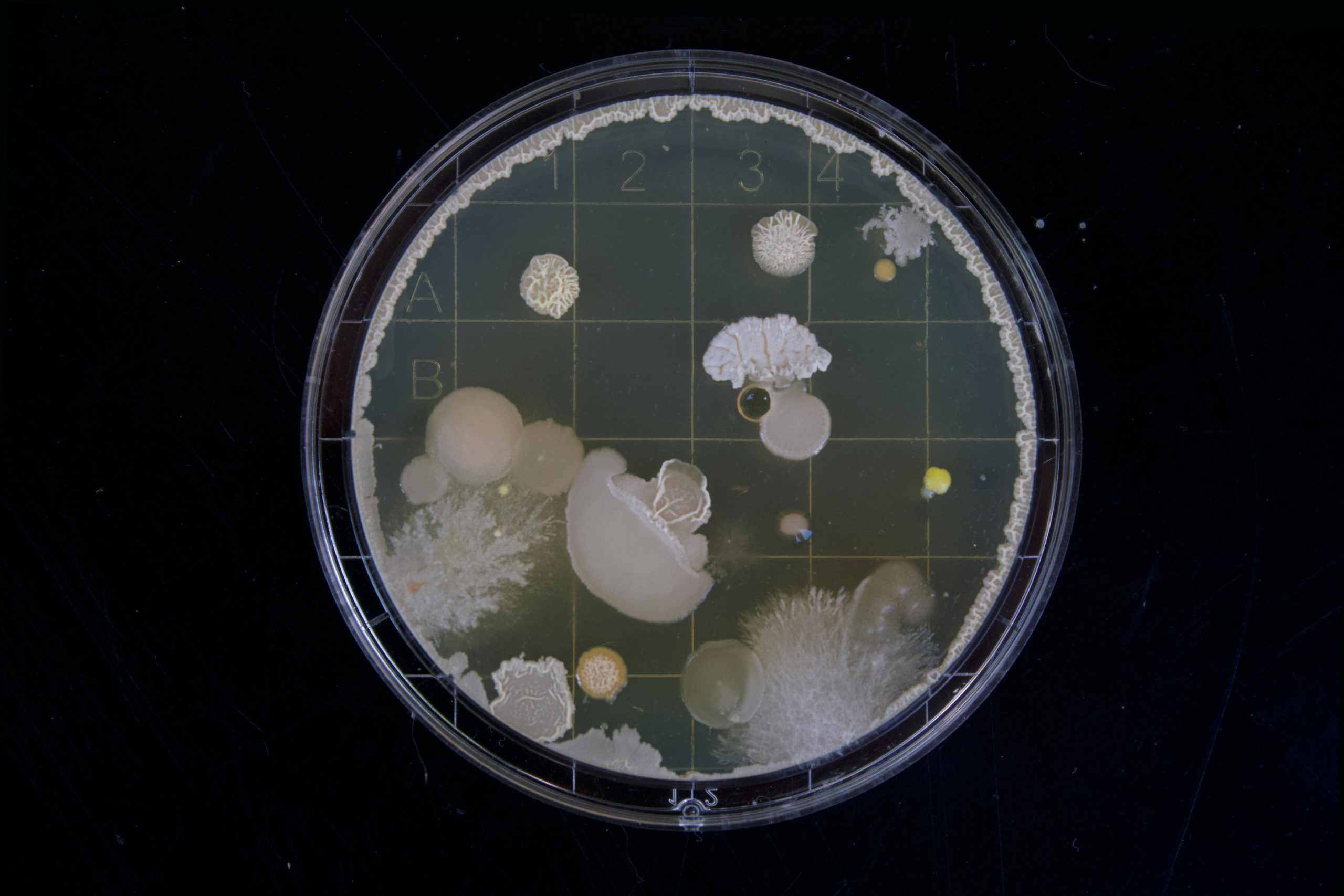 A particularity of aquaculture compared to other food production systems is its high vulnerability to various diseases. The close relationship that exists between the organisms (in our case, shrimp) and their surrounding medium (the water) makes them even more exposed to pathogens and transmission.

Disease outbreaks and their management have been one of the most significant constraints for shrimp aquaculture’s growth on a global scale. For example, in the case of the white spot syndrome virus (WSSV), the mortality it created was so high that productivity losses had an impact on Ecuador’s GDP during the beginning of the 00s.

Shrimp are especially vulnerable to a series of pathogenic viruses and bacteria present in the marine environment. Unlike fish and other vertebrates, shrimp don’t have a secondary immune response, meaning that their immune system can not produce molecules that recognize diseases that have already acted on the organism; in other words, shrimp’s immune system doesn’t have memory. This small detail is highly significant since that memory is the base on which most vaccines are developed; therefore, regular vaccines cannot be created and applied to shrimp.

Furthermore, shrimp are suitable for intensive and super-intensive production in terms of behavior, feed, and management. This obviously led to a search for higher productivity worldwide, increasing densities from 5-10 shrimp per m2 to 50-70 shrimp m2. This change was made without any further increase in biosecurity or management methods, and in the beginning, it worked until disease outbreaks started appearing. Today, densities can be much higher, of 700 or even 900 shrimp per m3, but the farms that produce in such high densities have learned and introduced a series of biosecurity measures, which will be discussed further in the text.

Main shrimp diseases and how they spread

Diseases can be categorized depending on their source. The most significant diseases in shrimp farming come from bacteria and viruses, followed by parasites and fungi to a lesser extent. This classification is not trivial since each one of those pathogens has different biological characteristics, and their treatment should be different. One common mistake among producers (and the population in general) is to treat viral diseases with antibiotics, which are only effective against bacteria (furthermore, not all antibiotics work for all bacteria strains); this leads to an extra cost, a null response to the treatment, and a health risk to the industry and society due to the possibility of creating antibiotic-resistant bacteria. Therefore, knowing the disease’s etiology (or origin) is key to the treatment and response.

The most significant viral diseases that have had a substantial impact on productivity are the white spot syndrome virus (WSSV), the Taura syndrome virus (TSV), the yellowhead virus (YHV), and the Infectious hypodermal and hematopoietic necrosis virus (IHHNV). Even though those are not the only viral vectors in shrimp farming, they are the ones that have caused more losses worldwide.

In the case of bacteria, the main negative effects observed come from the Vibrio genera (i.e. V. parahemolyticus or alginolyticus), causing pronounced effects like high mortalities, necrosis, and cuticular lesions, and some effects that are more challenging to assess, like slow growth or absence of appetite.

A special mention for bacterial diseases is the Acute Hepatopancreatic Necrosis Disease (AHPND, previously known as Early Mortality Syndrome or EMS) which caused extreme mortalities in young seeded shrimp, where mortality could reach 90-100% within 20-30 days after seeding.

For the fattening process, other bacterial genera that could negatively impact productivity are Rickettsia and Mycobacterium. The filamentous bacteria group can severely affect the young shrimp and postlarvae survival in hatcheries.

Fungi pathogens are not as significant in shrimp fattening, but they can be substantial in the hatchery or larval rearing. In fattening, a combination of bacterial diseases, fungi, and parasites lead to a condition known as black gills disease, which affects the growth and survival of the individuals, impacting significantly on productivity.

The different biological characteristics mentioned above affect not only treatment (which will be discussed further) but also how these diseases are transmitted and how they spread.

Horizontal transmission is the one that is passed from one organism to the other without any specific relationship between both. Horizontal transmission can be passed through coexistence and contact or through a vector (such as a bird, the feed, or the water pumped). Farm management, good practices, and a good location can help prevent this kind of transmission.

On the other hand, vertical transmission is the one that is passed from the broodstock to its spawn, producing infected larvae, which will present the disease even if the farmer has excellent practices. To avoid vertical transmission diseases, farmers need to buy larvae from a hatchery that uses Specific Pathogen Free (SPF) broodstock and feed that counts with high biosecurity standards. Even that can present laboratory results of the SPF characteristic of the larvae itself. Obviously, the higher the standard for the larvae, the higher its price.

Disease management can be treated with two different approaches: preventive and prescriptive.

Prescriptive management refers to the treatment of diseases as they appear, usually by the administration of some drug or chemical. This is the classic management system and the one that was most used during the 1980s through the 2000s

Prescriptive medicine has proven to be effective in the short term but with a significant risk to the sustainability of the activity. As medicine is applied (especially in the case of antibiotics), the pathogens acquire resistance, making treatment increasingly difficult and posing a severe threat to the activity and even to human health.

Other treatments, such as formaldehyde for parasite treatment, have been banned due to these chemicals’ impact on human health. Furthermore, not all diseases have effective medical treatments, and this is true for almost all viral infections currently present in shrimp farming, in which case there is no prescriptive method available, and only management strategies can be undertaken (i.e. to harvest or not to harvest).

Disease outbreaks in shrimp are nothing new, and farmers, along with researchers and other stakeholders, have been able to manage them as they appear; nonetheless, when one virus or bacteria is under control, a new one seems to appear. These outbreaks are particularly significant in intensive production where transmission is fast and high densities can result in enormous mortalities in a short period.

For that reason, producers and researchers have worked together in developing new management methods that ensure the sustainability of shrimp aquaculture, turning their heads towards preventive management.

Biosecurity is nothing but the techniques and methods followed to reduce infection risk as much as possible. Biosecurity protocols are several and contingent on each farm’s production methods. Closed systems with high production densities (such as RAS systems, hatcheries, and nurseries) tend to have more strict biosecurity protocols since the economic risk associated with infection is higher in those spaces. On the other hand, open production systems (like earth pond production) are more difficult to control, reducing risk management possibilities.

Biosecurity measures include the disinfection of equipment and vehicles that enter the facilities, the use of specialized equipment and cloaths for anyone that enters the facilities, constant hand and shoe disinfection by staff, and the use of equipment that reduce the contact of possible infected surfaces with culture water, minimum contact with the produced organism, acquisition of certifies pathogen-free organisms and feed, continuous disinfection of tanks, water treatment system, and pipes after each production cycle.

Other biosecurity measures can be applied to water, for example, by using probiotics, bioremediants, and antioxidants; producers intend to reduce the presence of pathogenic bacteria and increase the immune response of shrimp if they ever encounter said strains. These measures are useful when talking about large open systems and have shown very good results over the last years.

As we have probably deducted, setting up biosecurity protocols is not that simple. The first problem we encounter is an economic one; the farmer needs to buy infrastructure and an entirely new set of consumables. This kind of investment is difficult to assume for most farmers, and, as we know, financing can be challenging to obtain, even though the investment will probably be worth it due to the increased productivity.

The second challenge a farmer might encounter is compliance by the staff and providers. The continuous disinfection can be tedious, and if the staff is not well trained, it might seem like just a useless company whim. To avoid this, it’s important to include staff training and sensibilization as the biosecurity protocol is introduced instead of just implementing it without any explanation. This way, technicians and the rest of the personnel can easily understand why they need to change clothes and disinfect everything carefully and how the farm and themselves will benefit from that.

As we can see, there is much more to disease and infections than just antibiotics. Farmers need to keep up with all scientific advances and management techniques that can help reduce risk. The implementation of a biosecurity protocol and a management system to reduce possible disease outbreaks is the first step, followed by training and sensibilization, leaving for the last possible response the use of prescriptive medicine. This way, shrimp farming will be more sustainable, farmers will increase productivity, and society will benefit, not only from increased food security, but also from reduced use of medicines that can have a negative impact on the environment and on human health.