Estimating biomass: How many shrimp are in my pond? 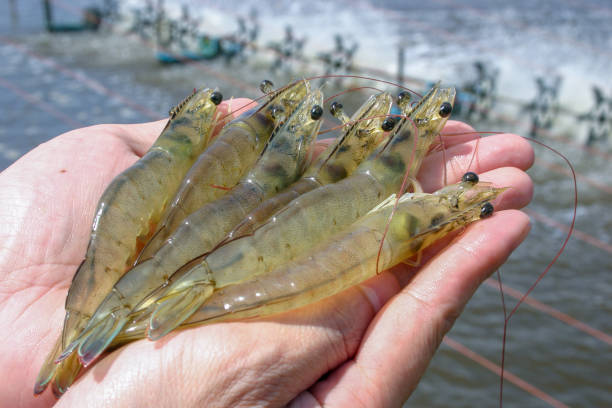 The success of a shrimp farm, as in any other agribusiness, consists of its capability to produce biomass at a lower cost than its selling price. For shrimp, the biomass produced will be equal to the added value of the individual weight of each shrimp. Since the production consists of thousands or millions of organisms, it is not efficient to weigh and add each individual shrimp produced; instead, farmers use average values of weight and survival to estimate the biomass in a pond. This estimation is key to every single decision made at a farm, from feeding rate to harvest time all the way through the different inputs needed for production.

As opposed to other agriculture or animal productions, aquaculture is carried out in the water, and constant manipulation of organisms tends to have detrimental effects on their survival due to increased stress and possible damages to the skin or, for shrimp, exoskeleton. Therefore, estimating the biomass of shrimp might be difficult.

This week we are going to talk about one of the components of shrimp biomass: the number of shrimp in the pond and the different strategies in place for its estimation.

The most used system to estimate the population in a tank comes from the ecological sciences and statistics. In this technique, farmers use a net with a known area; they throw it a certain number of times in different parts of each pond and count the number of shrimp obtained in each throw. Then, they do an average of this count, and since they know the area of the net, they can deduct the density of shrimp per m2. Once they have the current density, the number can be extrapolated by multiplying the average density by the area of the pond, obtaining the total number of shrimp per pond.

Although the theory behind this technique is solid, it also has certain conditions that are not fulfilled. The first and most important one is that we assume a uniform distribution of shrimp, meaning that they are all equally distributed around the pond’s floor. We know this to be untrue, shrimp move around the pond and form patches of presence, with more shrimp near the shore than in the center of the tank, leading to our second problem: sampling. For this method to function, we need to have a significant number of random samples that cover most of the pond’s different areas, which might be difficult, especially in large ponds, where samples are almost always gotten from the same docks, meaning the same sampling points, and almost always neglecting the pond’s center. Once we consider we have a significant sample of the pond’s area, we need something else, a significant number of shrimp counts, meaning that we need to throw the net in a way that our measures cover a normal distribution.

In reality, almost no farmer has the time to complete all the requirements for the data samples to be significant, and even so, most of the time, they can fairly estimate the population in the pond almost always with certain error, but that’s a granted for all estimation techniques.

Due to cost, efficiency, and reliability, this technique is still the number one method used to estimate the shrimp population in a pond.

Another way of estimating the number of organisms in a pond is through the use of mathematical models. Actually, this method is complementary to the classic approach since it needs a base of data points to be able to obtain the parameters that will determine the shape of the survival curve. The advantage of this method is twofold. First, if the farm is going to use the same production methods (same system, same density, etc.) the parameters only need to be obtained once, meaning that we only need to sample the entire production one time, and the next cycle will follow the same pattern assuming conditions are similar.

The second and most important advantage of this method is the possibility of forecasting production. Since we have the parameters of how we expect the population to behave over the full production cycle, we can forecast the survival over time, which will help us estimate our expected biomass, making decision-making easier. With this information, we can know when we’ll have the higher biomass, how much feed we need to give at different points of production, and when is best to harvest our shrimp.

The downside of this method is that it is entirely dependent on data quality. If the data obtained during the sampling is flawed, the model will also be flawed, meaning that the model is only as good as the data gathered.

The use of information technologies

Shrimp is not the only aquaculture production that presents estimation problems; the same happens with other significant species such as salmon or tilapia. One of the first ideas developed within the information technologies to face these problems is the use of image detection to count and measure organisms. This solution has been very effective in the case of salmon; in the case of shrimp, it has been applied to productions in small confined spaces and, more importantly, in recirculating or clear water systems and for postlarvae counting in small volumes. The problem with image detection in most shrimp ponds is the fact that the water used is extremely turbid, making cameras useless.

Seeing this problem, researchers looked more closely into the etiology of shrimp. They detected that shrimp produced a specific noise when they ate, so instead of using cameras, they installed microphones. The detection of the differentiated length waves distinguished during production helped develop two interesting technologies: one that allowed the farmer to know if the shrimp were eating, conducting to the optimization of feed rates, and another one, still under development, that uses the noises perceived to correlate with the number of shrimp, allowing to estimate the biomass in the pond. In other words, the noises detected in a pond can be used to estimate the number of shrimp in it.

In the end, this techniques use mathematical modeling, just as the ones described in our previous post; the difference consists in the data gathering (by automating it, we reduce human error and increase the number of data points obtained per unit of time), the model functions, and the fact that is the computer the one that is going to do all the parametrizations and estimations, reducing the gap that separates the farmer from the complexity of the models.

Another potentially significant development within information technologies comes from the use of sonar to detect shrimp. This technology is not new; sonar has been used ever since the first world war to detect submarines. Sonar has also been extensively used in fisheries to seek fish banks or other potentially exploitable stock. The novelty here comes from its use in shallow waters, small and challenging spaces (like a pond), and specifically detecting shrimp. On the downside, this technology allows to know the biomass but does not give granular information; therefore, right now, it cannot specify the number of shrimp and their individual weight, which might impact the profit functions since shrimp prices don’t follow a linear behavior, but instead, they depend on the individual size of each shrimp.

There have been efforts to put on the market new equipment with the capacity of lasting inside a pond’s environment, obtaining continuous biomass reads using sonar technology; these reads allow the parametrization of mathematical models, which can help improve the farm’s management.

Although promising, the information technologies to estimate the presence of shrimp in a pond are still in their early stages. The use of image recognition is, by now, the most developed one, but it serves only a small number of farmers.

As we can see, significant effort has been made to develop new methods to determine the number of organisms in a shrimp pond, and it is for a good reason, estimation of the number of shrimp along with the estimation of weight will give us what in economics is known as a production function, which is the core of all the optimization methods and one of the best tools out there to optimize our production and targeting the objective of any commercial farm: to maximize profits.

One thought on “Estimating biomass: How many shrimp are in my pond?”